Innovaoleo (a Natac Group division) is coordinating INNOLEAF, an innovation project funded by Ayudas al Funcionamiento de los Grupos Operativos de la Asociación Europea de Innovación (AEI) [Aids to the Establishment of Operational Groups within the European Innovation Partnership], “Agricultural Productivity and Sustainability” in the olive sector. The INNOLEAF project seeks to make full use of the olive leaf, an industrial by-product that in Andalusia alone, amounts to 514,345 tons every year. This initiative is encompassed in the general sphere of the circular economy and bio-economy, in alignment with the Autonomous Community and national level Bio-economy strategy. Its primary aim is to obtain high value-added products for the international animal nutrition industry and with the possibility of marketing it in the future to the pharmaceutical, human food, and nutraceutical sectors. The Operational Group is coordinated by the SME Innovaoleo with the participation of the  Centro de Investigación y Desarrollo del Alimento Funcional (CIDAF) [Functional Food Research & Development Center], Department of Analytical Chemistry at the University of Granada, Zaidin Experimental Station (EEZ), which belongs to the Spanish National Research Council (CSIC), and Tejar Nuestra Señora de Araceli olive-growers’ cooperative. 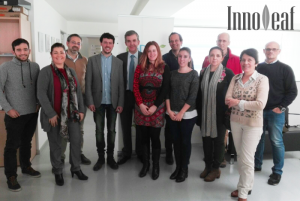 The following are the leading scientific-technical challenges to overcome: Innovaoleo is an Andalusian SME that belongs to the Natac Group and is dedicated to R&D, production & marketing of natural, plant-based ingredients, mainly Mediterranean plant  extracts. Innovaoleo’s primary aim in the INNOLEAF project is to develop a new generation of ingredients derived from the olive leaf. To do so, new innovative, post-extraction technologies will be developed and applied, as well as validated prior to their industrialization. The INNOLEAF project was launched in January 2018 and will run for 24 months. It has a budget of 218,330€ and has been funded by the Andalusian government through the Council for Agriculture, Fisheries, and Rural Development, as well as co-funded by the Ministry of Agriculture, Food, and Environment and with EAFRD funds.